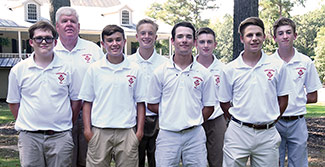 Lancaster High’s golf team can be described with two adjectives: Young and talented.

The seven-member team is made up entirely of freshmen and sophomores. And its freshman class boasts an already decorated golfer in Colby Sullivan, who’s had a couple of holes-in-one in his young career and has placed in the Virginia State Golf Association Youth Championship.

Sullivan was the individual medalist in Lancaster’s last two wins over Middlesex and Essex. Another freshman, Ben Pittman, has worked his way into the number two spot for Lancaster.

The Red Devils, who start their season a month before school opens, have four wins and two losses. The losses were to Essex and Rappahannock. They avenged the opening season loss to the Trojans on August 27, beating EHS by 27 strokes.

Sullivan shot a 1-under-par 34 in the nine-hole round at Hobbs Hole Golf Course as the low scorer.

Freshmen B. Pittman and DJ Zeiler shot a 38 each and sophomore Eli Pittman shot a 43 to round out the four scorers for Lancaster, who finished with a 153.

Essex shot a 180 on its home course with Montavious White shooting a 39, Logan Cooke a 44, Jaylen Davenport a 47 and Cliff Whitlock a 50.

Sullivan was the individual medalist again last Tuesday, shooting a 35 on nine holes at Lancaster’s home course Golden Eagle Golf Course in Irvington when the Devils beat Middlesex by an impressive 50 strokes, 180 to 230.

B. Pittman shot a 41 and Zeiler and E. Pittman had a 52 each as the four scorers for LHS. Clarke and sophomore Tristan McDaniels also played.

Peyton Lambert had the low score for Middlesex with a 40. Thomas Wilson shot a 58, Cole Stamm a 63 and Nicholas Daddario shot a 69 as the scorers for the Chargers.

Lancaster will host Northumberland Tuesday, September 17, in the final regular season match. The Northern Neck District tournament will be held September 23 and the Region 1A tournament, September 30.