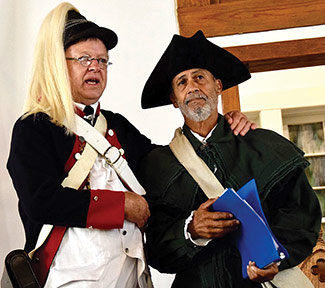 Every year for the last decade the Northern Neck of Virginia Historical Society has celebrated Robert Carter III’s 1791 Deed of Emancipation, which freed 500 of Carter’s own slaves almost a century before the Emancipation Proclamation criminalized slavery.

These celebrations usually featured a reenactment of Carter’s “Deed of Gift,” and focused primarily on the history and generosity of the white, slave-owning master who freed a portion of his enslaved servants before he was legally required to.

What happened to the slaves who were manumitted by Carter has, until this year, been only a footnote in the telling of this story by the historical society. However, this year the society brought the story of African American slaves to the forefront of its annual commemoration event by using their celebration to honor the black and enslaved people of the Northern Neck of Virginia who served in the American Revolutionary War.

“It seems to me the black history, the history of black patriots, has been either unknown or ignored or disrespected for a very long time. So this celebration is quite…