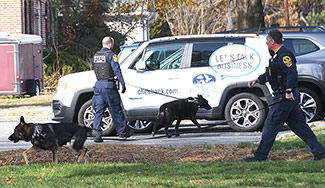 According to Lancaster County Sheriff’s Office (LCSO) chief deputy Major William Webb, LCSO deputies, Kilmarnock Police Department officers and Virginia State Police, along with members of the Kilmarnock Volunteer Fire Department and the Kilmarnock-Lancaster Volunteer Rescue Squad responded to the threat of a bomb at Chesapeake Bank at 97 North Main Street around noon on November 21.