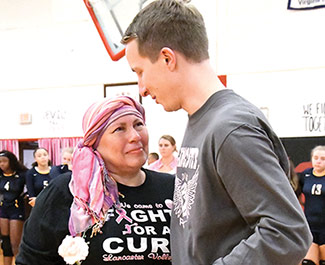 The Lady Devils on Thursday, October 17, raised over $4,000 for breast cancer research and education. As a bonus, the Lady Devils won their sixth Northern Neck District varsity volleyball with a 3-0 sweep against Washington & Lee.

Lancaster’s annual Dig Pink event, which benefits Side Out Foundation and its national breast cancer awareness campaign, included a bake sale, raffle and the recognition of cancer survivors and those lost. The event raised over $4,500 for Side Out last year and the donation should be close to that amount again this year, according to LHS finance manager Sarah Pittman.

Each player from Lancaster and W&L played in honor or memory of someone. All of Lancaster’s junior varsity and varsity players honored Donna McGrath of Irvington, who has been an active parent and volunteer in Lancaster schools for more than two decades. McGrath has been a committee member of the Dig Pink fundraiser for the last four years.

The event was dedicated to the late Jackie Oren of Weems, whose daughter, Grace, plays for the varsity volleyball team and husband, Craig, is a physical education teacher and coach at LHS. Jackie died September 7 after a year-long battle with cancer…