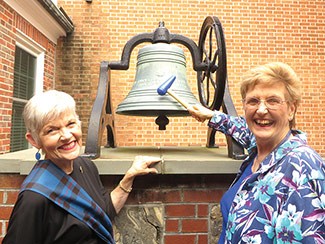 KILMARNOCK—The week of September 17-23 recognized the annual national celebration of Constitution Week. This observance was proposed by the national organization of the Daughters of the American Revolution (DAR) in 1955, was passed by Congress as Public Law #915 in 1956 and was signed into law by President Dwight D. Eisenhower.

“Interestingly, the celebration of the Constitution this year began with the reading of the Declaration of Independence in collaboration with Historic Christ Church on July 3,” said committee chairman Dr. Pamela Ward. “Adults and young people read parts of the document that laid forth the reasons the American colonies wanted to separate from England. It laid out the principles that inspired the Constitution.”