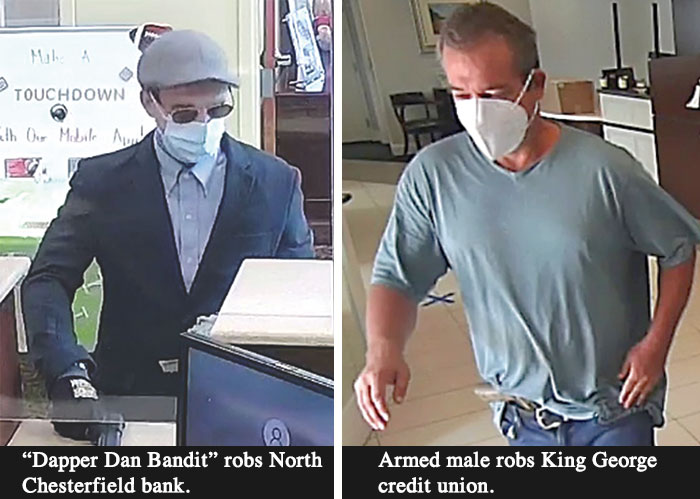 Once the victim teller complied with his demands, the subject exited the bank and departed in a white sedan, reported Federal Bureau of Investigation Richmond Field Office public affairs specialist Dee Rybiski.

The subject is described as a white male, ages 40-50 with gray hair. At the time of the robbery, he was wearing a faded green t-shirt and blue jeans. This individual should be considered armed and dangerous.

Report any information to help identify this person to the FBI Richmond Field Office, 261-1044 or send tips to tips.FBI.gov. Calls may also be directed to Detective Peltola or Detective Furlong with the King George County Sheriff’s Office, 540-775-2184 or 540-775-8497, respectively.

Meanwhile, FBI Richmond’s Central Virginia Violent Crimes Task Force continues to search for the white male subject, nicknamed the “Dapper Dan Bandit,” responsible for the armed robbery of the First Community Bank in North Chesterfield on September 29. In a recent update, the FBI announced a $5,000 reward in this case.

This subject is described as a slender white male, approximately 5’8” to 5’9”, ages 40-50 with auburn/brown hair. At the time of the robbery, he was wearing a gray five panel/flat cap, a light-colored dress shirt, a dark blue blazer/jacket, khaki pants, white socks, brown square-toed dress shoes, sunglasses, a white medical-style mask and black “mechanics” gloves with white lettering.

Report any information to help identify this person to the FBI Richmond Field Office at 261-1044 or send tips to tips.FBI.gov.