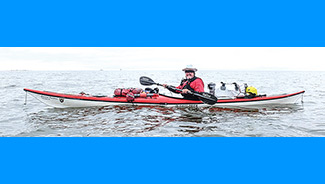 Steve Chard, an intrepid kayaker from Dorset, England, paddled through Northern Neck waters March 8-10 on the last leg of a trip that will cover more than 6,000 miles in the U.S. and Canada.

Mathews and Burgess were two of his overnight stops on “The Great Loop,” a counterclockwise circumnavigation journey he started in June 2018.

From Halifax, Nova Scotia, Chard paddled west, then south to Florida and he is now headed north up the coast.

Terry Brown of Mathews heard he was headed her way….