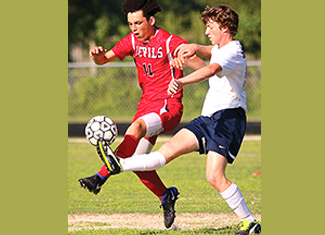 West Point scored twice in the first half and held off a second-half offensive strike by Lancaster to edge the Red Devils, 2-1, in a Region A boys soccer quarterfinal match last Friday.

Lancaster ended its season at 9-5-2 overall, the best record for the Devils in over 5 years. Lancaster only won two games last season.

“It was a tough way to end the year,” said LHS coach Rob Pittman. “They’ve worked so hard and built a good program again. But it was great to see the positive attitude coming off the bus when we got home. The seniors sent out a message to the rest of the team to tell them to enjoy every moment and give it all they can. And they were saying, ‘next season starts tomorrow’.”