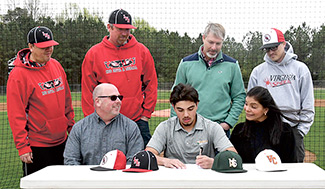 Nick Wohleking will take his baseball skills to Norfolk State University next year.

Wohleking, a Lancaster High School senior, will play for the Division 1 Spartans. He signed his letter of intent with family and his coaches at the Red Devils’ home field, Dream Fields in Kilmarnock, last Saturday. He officially committed to Norfolk State on October 25, 2019.