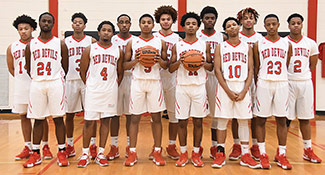 No doubt the varsity Red Devils have a bull’s eye on their backs. Everybody in the district, region and state are aiming to beat Lancaster, the 2018 Class 1A champion.

The 2018 state crown was the second for Lancaster’s boys basketball team and coach Tim Rice in six years. The Devils won the state title in 2012 and finished as the runner-up in 2016. And Lancaster is already off to a 5-2 start this season with its losses coming to private school Cape Henry Collegiate and the Eastern Shore’s Northampton just before the holiday break.

Rice lost eight seniors from the championship team, including the big three of Martez Davis, Charlie Henderson and Darius Reed. The three combined for over 1,030 points last season, which leaves a lot of offense to make up for.

However, Rice does return five seniors and some experienced juniors, including junior forward Corey “CJ” Smith, who, as a sophomore, sparked Lancaster with a 15-point performance in the state final last year. Rice also brings back senior guard Terence “TJ” Frisby, who helped keep the…