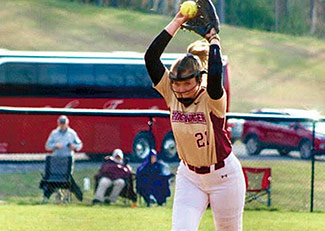 Brantley Swift of Reedville had her debut season on the mound cut short at Bridgewater College, but the freshman right-hander still managed to garner high honors.

Swift, a pitcher who went unbeaten in the abbreviated softball season, was named the Rookie of the Year and earned All-State honors from the Virginia Sports Information Directors (VaSID). Swift joined two teammates from Bridgewater on the All-State team.

“I was really surprised,” said Swift. “I was babysitting and a friend texted me congratulations. I said, for what? Then a few minutes later the coach sent something out in the team text congratulating us.”

For her work in the circle, Swift earned the Rookie…[to-view-more]